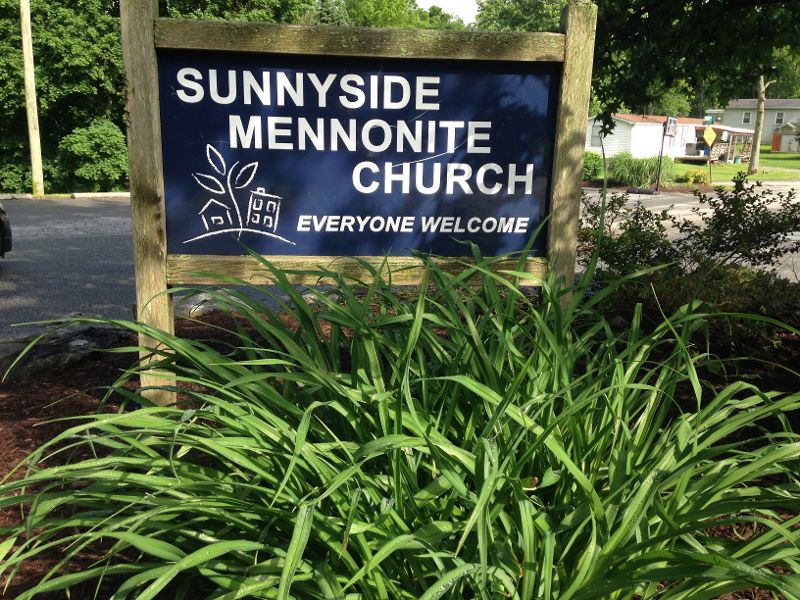 One morning in the summer of 1929, while on his daily route of delivering milk to Lancaster, David S. High noticed the community of Sunnyside.  He picked up some children on their way to the Temperance Home School, a local public school where Alta Barge was the teacher.  In conversation with them, he realized they had no Sunday School to attend.

Some men in the Willow Street Mennonite and Strasburg Mennonite congregations were feeling a nudge from God to find an area where they could share the gospel.  Brother High recommended they focus on Sunnyside.

Located on the banks of the Conestoga River in Sunnyside, a former dance hall (36’ x 50’) was leased for $5 a month.  It was fitted with benches and stoves and was very pleasant in the summer, but very cold in winter.

Sunday School began on January 12, 1930 with an attendance of 157.  Sunday School was held every Sunday afternoon at 2 pm with preaching services twice a month on Sunday evenings.  The average attendance for the first four Sundays was 130, with 17 organized classes. Walking conditions were not favorable and often 20 sleds were seen parked outside.  Prayer meetings were started on Wednesday evenings. The mission was under the supervision of the Willow Street/Strasburg congregations.

Because this was during the Great Depression, material needs among the folks at Sunnyside were great during the first years.  Clothing was distributed before the school year began.  Bread, milk and groceries were supplied for a family for a month because the father was ill.  A number of shoes were purchased for children.  One hundred pounds of milk was distributed to 35 homes each day for a period of time.  Electric clippers were brought to give free haircuts.  Many of the families could not find work.

The first open air singing was held on the bank of the Conestoga Creek.  The attendance was greater than at any other social affair ever held at the dance hall.  The outdoor singing continued each year for several years, with the attendance growing to 1200 in 1932 and to 1600 in 1934.

On June 25, 1933 a committee of 14 met at the Sunnyside Mission to discuss possibilities of building a place of worship.  A 150 x 100 lot located in a locust grove at the intersection of five points was chosen as the location to construct a building.

On August 30, 1934, about 125 people gathered at the new mission site for a groundbreaking service.  The men set to work with plans to complete the building by Christmas.  On January 17, 1935, the new church building was dedicated.  It was a 36’ x 50’ brick structure with a slate roof, basement and heating plant.  The cost was $4,057.  3400 hours of free labor were contributions by various churches in Lancaster Conference.  All of the cost except $900 was met by contributions and the $900 was paid from the general fund of the Mission Board.

In 1946, David (Pappy) High was ordained to the ministry.  Witmer Barge, and his wife Ella, worked closely with the Highs and, in 1950, Witmer was ordained as the first deacon.  Four years later he was ordained as a minister.

In 1960, limited kitchen facilities were added to the building along with some classrooms.  In 1966, a well was drilled and restrooms were installed in the church building. In 1970, the lot across the road was also purchased for more parking space.

On October 9, 1972, a renovation of the church building was initiated including a new 22’ x 30’ addition which provided five more classrooms, a new kitchen, and a nursery.  Again, 2000 of hard work were donated by the congregation and the cost was about $41,332.  Dedication services were held on April 15, 1973.

Today, Sunnyside Mennonite Church is made up of many different kinds of people who come from different places and life experiences.  We are business owners, entrepreneurs, educators, nurses, engineers, students, truck drivers and farmers.  Some of us have lived other places.  Some of us have lived in Lancaster County our whole lives.  We live in Lancaster city and the outer lying communities.  We are runners, writers, artists, musicians, and gardeners.  We are single, we are married.  We are young, we are old.  We are rich, we are poor.  We are learning to love God, our neighbor, and ourselves.  The church has been rooted in Sunnyside since 1930 and continues to explore what God is up to in Lancaster and beyond.  Sunnyside is a member of Lancaster Mennonite Conference.